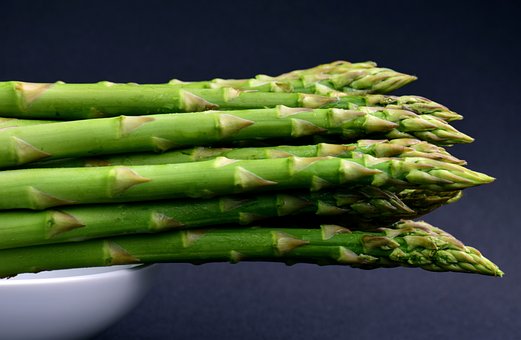 It is an excellent source of the B vitamin folate. A serving of six cooked fresh asparagus spears contains 1 g dietary fiber, 490 IU vitamin A, 10 mg vitamin C and 131 mcg folate. Besides, it’s also low in sodium, fat and practically no cholesterol.

The most nutritious way to serve asparagus is by serving it fresh, boiled and drained. Canned asparagus may have less than half of the nutrients found in freshly cooked spears. As such it is encouraged to take asparagus when it’s fresh.

Search for bright green stalks while purchasing asparagus. The tips should be purplish and tightly closed and the stalks should be firm. Asparagus is in season from March through August. Always avoid wilted stalks and asparagus whose buds have opened. When storing, keep it fresh in the fridge.

To keep it as crisp as possible, wrap it in a moist paper towel and then put the entire package into a plastic bag. Keeping asparagus cool helps it to hold onto its own vitamins. At 32 degrees F, asparagus will retain all its folic acid for at least 2 weeks and almost 90 percent of its vitamin C for up to five days. At room temperature, it would lose up to 75 percent of its folic acid in three days and 50 percent of the vitamin C in 24 hours.

The adverse effects associated with asparagus is that after eating, we will excrete the sulfur compound methyl mercaptan, a smelly waste product, in our pee. Eating asparagus may also interfere with the effectiveness of anticoagulants whose job is to thin blood and dissolve clots because asparagus is high in vitamin K, a vitamin produced naturally by bacteria in our intestines, an adequate source of which enables blood to clot normally.

The white portion of the new green asparagus stem is woody and tasteless, so it is possible to bend the stalk and snap it right at the line where the green begins to turn white. If the skin is extremely thick, peel it, but save the parings for soup stock.

What happens when we cook asparagus? Chlorophyll, the pigment that makes green vegetables green, is sensitive to acids. When we heat asparagus, its chlorophyll will react with acids in the asparagus or in the cooking water to form pheophytin, which is brown. Because of this, cooked asparagus is olive-drab. We can prevent this chemical reaction by cooking the asparagus so fast that there’s no time for the chlorophyll to respond to acids, or by cooking it in lots of water that will dilute the acids, or by leaving the lid off the pot so that the volatile acids can float into the air.

Cooking also changes the feel of asparagus. Water escapes from its cells and they fall. Adding salt to the cooking liquid slows the loss of moisture.